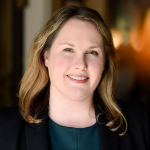 Janelle is an attorney at Tatum & Atkinson, PLLC. Janelle's practice focuses on representing people who have been injured or harmed when someone else is at fault.

Janelle grew up New Orleans, and North Carolina became her forever home in 2014. Janelle received her Bachelor of Arts degree in Urban Studies from Rhodes College in Memphis, Tennessee in 2002 and her Juris Doctor degree from Thomas Jefferson School of Law in San Diego, California in 2006.

Janelle lives in Raleigh with her young daughter, who is the light of her life. In her free time, she enjoys exploring restaurants and breweries in the Triangle and going on outdoor adventures with her daughter.